Residents of Portugal have the choice to register under the Portuguese NHR, the non-habitual residence. Registration and acceptance as a non-habitual resident will allow a person to pay no tax on most foreign sources of income for 10 years. Given the existing international tax laws, in my opinion, this can be better defined as a tax exemption on foreign passive and capital income.

This is my first, professional interpretation of the Portuguese NHR rules and laws. Very much like the “resident but not domiciled status”, I feel that a one-sided interpretation makes things too easy. Yep, I am being the strict German again. More on this further down.

Most people heavily overestimate the possibilities of the Non-Dom Status and only see one side – most of the time, the side of the country they want to move to. But don’t forget there is always–there must always be—another country where the money is coming from, otherwise the income would not be foreign. And that other foreign countries might have jurisdiction to tax.

And then there is the double tax treaty between Portugal and the foreign country. That might restrict Portugal in applying Portuguese law. How does this work and why?

This is why a one-sided interpretation might sound good on some consultant’s website—someone who claims “Malta is so easy.” And that Portugal taxes nothing. And that you will live happily ever after.

It’s true that there are fantastic possibilities. But being all one-sided about it is like selling ice cream and not telling clients that it will make you fat if you don’t exert some will-power. Of course, it tastes fantastic, but that’s only one side.

I have seen a lot over the course of my nearly 20 years working in the tax field and I have seen rules, interpretations and practices change. Therefore, my advice is never borderline but always conservative. I am trying to anticipate future changes and interpretations.

That is what I call sustainable tax advice: Staying ahead of the game.

Myth: “Double no tax” also not in Portugal (NHR)

The reason being is that normally the foreign country would tax any income under its own jurisdiction and only gives up this right by adhering to the respective double tax treaty with Portugal. It’s a myth that “double no tax” arrangements are legally possible and it’s a lie that this is even wanted or purposely integrated into laws.

If there is no risk or chance of double taxation, then logically the double treaty should not apply, anyway.

In any case, there are still ways to structure your affairs in an efficient manner—I will come to this later. Let’s start beforehand however with an investigation and analysis of what it means and what it takes to become a non-habitual resident in Portugal.

First of all, there are the legal requirements:

You must reside in Portugal for at least 183 days per calendar year or ( The or is very important) have the center of vital interest in Portugal. I am aware that the Portuguese domestic guidelines from the Portuguese inland  revenue service provide a slightly different interpretation for persons spending less than 183 days in Portugal,  as follows

“When remaining for less time there (than 183 days), to have a house in such condition that it is implied the current intention is to maintain it and occupy it as a habitual residence.”

…Which makes it seem easier than the center of vital interest. However, I would say that if it is challenged by a foreign, non-Portuguese revenue service, one would still have to apply the tiebreaker of the OECD model convention and that would potentially restrict Portuguese domestic law. Sorry for being super technical here; I am happy to explain this further in a consultation.

I would say, to be on the safe side, to apply common sense and logic, the way forward is to move your place of vital interest, meaning your whole life, to Portugal.

Yep, me being German again. Just move and live there. It’s a beautiful country. Take your family with you. Meet new friends. Join a book club and be absorbed by the vibrant culture. Obviously, leave Portugal and visit friends and family abroad. You do not need a tax advisor to tell you how many days to spend where. Just live there for real. That’s all it takes. It’s like a shop or restaurant without price tags: If you need to ask how much you can’t afford it.

One way or another, let’s assume that a person has now moved to Portugal, has applied for the NHR officially, and has been accepted as a non-issue resident in Portugal.

Living in Portugal and starting a business abroad

Most people think that’s it. They think they can just set up a company in the UK or Malta and live happily ever after in Portugal. But from a Tax perspective, that’s not going to be the case. The reason is that according to the rules of the NHR, the income that is not taxes needs to be foreign. You are right in saying that a company in Malta is foreign to Portugal. However, that is not always true under tax laws. As usual, when it comes to money and taxes, it gets complicated. The complication however is not new. And it is nothing special. And it is nothing illogical.

If you manage and operate a Maltese or UK company in and from Portugal, under the CFC rules, the inland revenue department of Portugal will have the right to look through the company — which means for tax purposes, the company does not exist. And if the company does not exist and is getting looked through, the only person remaining then is suddenly a natural resident of Portugal. And that natural resident will be taxed at the full income tax rates because suddenly the person and the income is not foreign. This is when the rules of the NHR cannot be applied.

The solution: combination of NHR and Malta Limited

Since I mentioned the good old-fashioned CFC rules, even if some very nice Portuguese lawmaker made it so easy for the NHR to register persons, scrap the domestic Portuguese CFC rules: Since 2020, the European Union has made it an obligation for every member country to have CFC rules implemented in domestic law. That has been done under the anti-tax avoidance directive.

In this very ATAD (which as we know has been transposed into Portuguese law) you will see the legal background to that above: the substance carves out or substance escape. This means that if you establish and operate an entity in the EU / EEA for a real economic purpose combined with a real, genuine activity—nothing to fear.

To make a long story short: When you are registered under the NHR, it is very important that, whatever foreign company you are using, that company must be in a country with a beneficial tax rate, such as Malta: You will need substance.

What does substance in the context of Malta Limited mean

The substance in Malta means to have an operation there even if it is small; to have management/a director there, for instance, and to have value created in Malta.

Mind you, boys and girls: Even if you have substance in Malta you can still knowingly or unknowingly but most important additionally created a permanent establishment in Portugal for the MT entity.

How? By just managing the company. That does not mean basing a top CEO position there but rather ANY management position (HR, IT, etc.)

And a special treat in the same treaty, there is also the option of a so-called SERVICE permanent establishment. Read it for yourself first. 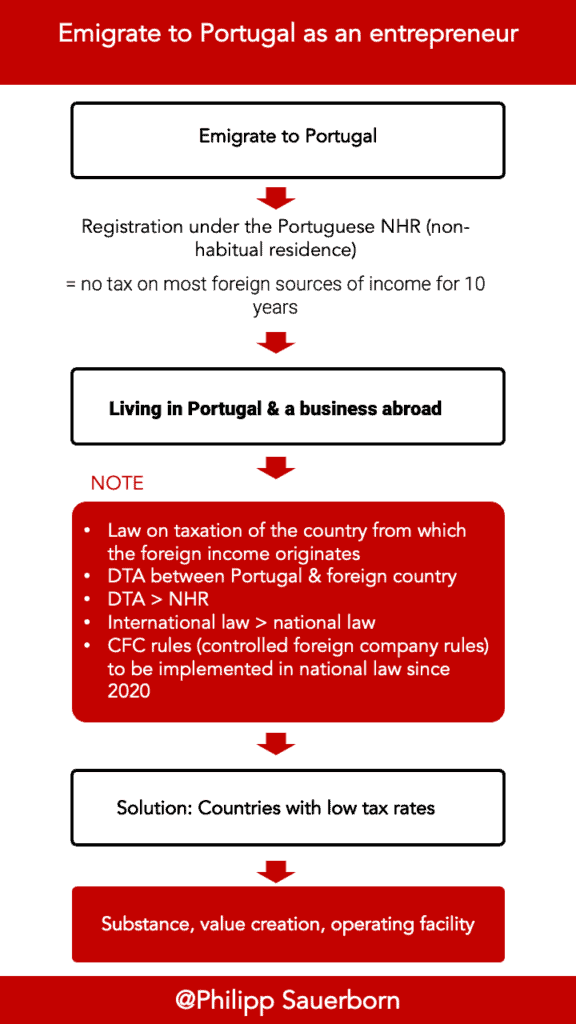 If you are an entrepreneur who wants to benefit from the NHR status, one option is setting up a company outside of Portugal. By setting up a Malta Limited, you won’t have to pay tax in Portugal, as the profits of the company are declared as foreign income, which is tax-free under the NHR scheme. However, you should look at the legal requirements that are applicable. In my experience, a one-sided view of the law is not advisable. Rather, you should go by what the law says in its essence and what the legislator intends.

Also, simply setting up a Malta Limited is not enough. Issues such as DTAs, CFC rules and substance as well as value addition should be considered.

I can advise you on how to set this up properly whilst factoring in a cost-effective approach. This would include advice on the overall structure and scheme, company formation, but also registration in Portugal, including any local Portuguese issues – such as finding accommodation or local guidance – as competently as I can.

Moreover, this also includes advice on your specific case, the concrete substance and ongoing support of your business, e.g. bookkeeping, accounting, provision of an office, etc.

DWP QuickCheck
Check within few minutes, whether Malta works as a business location or not.
Learn more

Are you considering Portugal? I support you.

Do you currently live in Portugal or are you thinking about moving to Portugal?

If the Malta Solution has attracted your interest, I have the following offer for you:

Send me a request for a free and risk-free initial consultation to find out more about you and your plans. I will be happy to give you my recommendations for further action.

Philipp Maria Sauerborn is a certified tax advisor and expert in International Tax & Blockchain. As CEO of Dr. Werner & Partner in Malta, he has already advised over 3000 clients on their tax situation.

©2020 Philipp Sauerborn – Made with ♥ by HandsUp Media